Many of us dream of having an oriole take up residence in our yard or neighborhood. They arrive starting in mid-April. Hearing a brilliant-colored male serenade potential mates with its uplifting whistle is truly a cause for celebration! Out of nine possible U.S. species, the Orchard and Baltimore orioles are the ones we see in the eastern U.S. 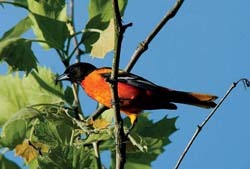 Orioles nest high up in the tree canopy.  The oriole nest is an engineering masterpiece and is one of the most amazing and complicated nests of any North American bird.

Looking like a small gourd-shaped pouch hanging from the tip of a thin branch, oriole nests are skillfully woven out of hundreds of single fibers … one at a time. Building materials include plant fibers, grasses, vines, tree bark.  It can take as many as 15 days for an Oriole to weave its nest. One Baltimore Oriole was observed spending 40 hours building a nest with about 10,000 stitches and the tying of thousands of knots, all with its beak.

The female oriole is the primary engineer and fabricator, but males occasionally plays the role of foreman, supplying materials and conducting inspections while the nest is under construction.

While nests are typically woven out of plant fibers such as strips of milkweed stem, man-made items, such as string and yarn, are readily used in their place. Horses also provide nesting materials in the form of hair from their tail and mane.  You can help them by placing 6" pieces of natural string or yarn on tree limbs or in suet cages.

Orioles can be drawn to your yard if you provide food such as orange slices or halves, grape jelly, mealworms and/or nectar. Homemade nectar should be a mix of 6 parts water to 1 part sugar; so 2 cups water with 1/3 cup of sugar, for example.  Since orioles fly high up in the trees, you need to place their feeder in an open area so they will see it from the air.  It is also a good idea to put their feeders in an area away from your other bird feeders.  Freshen up the food every few days and keep the feeder clean and you have a better chance of having them stay around once they have found you.

If your dream is to have one of these brilliant and artistic birds as a resident in your yard, our Certified Bird Feeding Specialists can show you the oriole nectar, mealworm and fruit feeders that might just make your dream become reality.