Hummingbirds are truly one of the most fascinating groups of birds on the planet.

Out of all birds, they have the fastest metabolism, the largest heart in proportion to body size, the fastest heart and wing beats, the most aerobatic flight, the most brilliant feather iridescences and one of the highest rates of nesting success.

Hummingbirds differ from other birds in some not so positive ways, too. They are the lightest bird at just 1/10th of an ounce, have the smallest brain, are virtually incapable of walking, and fall prey to Bull Frogs, Praying Mantis and large spiders.

Hummingbirds can consume up to twice their body weight in nectar every day. In order to accomplish this amazing feat, hummingbirds' bills and tongues have evolved into incredibly efficient feeding tools.

They use the flexible tip of their bill to capture insects and insect eggs from the ground and on plants. They love spiders and spider eggs.

Despite popular belief, hummingbirds do not feed on nectar by sucking it up with their bills; instead, they actually lap it up with their tongues. They feed by dipping their forked, open-grooved tongues into nectar at up to 12 times a second.

A great way to see this amazing tongue in action is to use a Wild Birds Unlimited Hummingbird Feeder or a WBU Window Hummingbird Feeder. With their clear plastic bases, you will be able to witness the rapid lapping action of these fascinating hummingbirds.

So enjoy them while they are here, you'll miss them when they're gone!

When do Hummingbirds Arrive?

We recommend you put out your hummingbird feeders around April 15th, tax day. Learn more about hummingbird migration here. You should expect to see hummingbirds at your feeders by the first full week in May.

How to Attract Hummingbirds

Hummingbirds are found in most habitats across North America, including backyards. Offering nectar feeders and nectar-producing plants will help you maximize the number of hummingbirds that visit your yard. 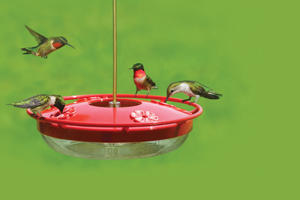 We recommend using the Wild Birds Unlimited Hummingbird Feeder to attract the most hummingbirds to your yard. Designed to appeal to hummingbirds, this feeder allows them to hover or perch while feeding. It does not leak. Bees can’t access the nectar solution, and the built-in ant moat deters ants. The feeder is easy to clean, and the nectar solution recipe is printed under the lid. Lifetime guarantee.

The Wild Birds Unlimited Decorative Hummingbird Feeder adds an aesthetic flair to your yard, is available in the three most popular flower colors for hummingbirds and has the same great features as our standard hummingbird feeder. Lifetime guarantee.

Based on our standard feeder, the Wild Birds Unlimited Decorative Window Hummingbird Feeder brings the birds in for closer views. Watch their tongues lap up the food, darting in and out of the nectar solution up to 12 times per second. It is the only window hummingbird feeder that contains an ant moat. Lifetime guarantee.

We offer assorted decorative glass or ceramic hummingbird feeders. They are beautiful for you and functional for the birds. 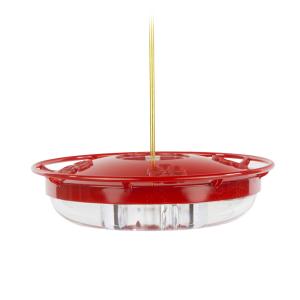 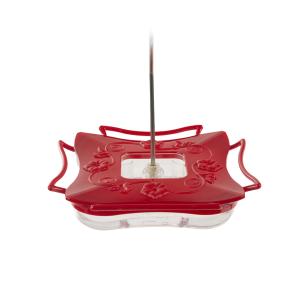 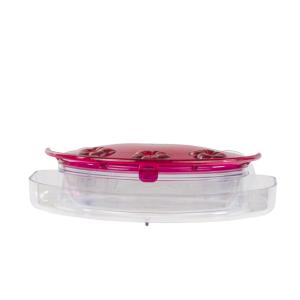 Offer our Wild Birds Unlimited Nectar, or mix up your own water and sugar (4:1 ratio). Clean nectar feeders every two to four days; then fill with fresh nectar solution.

Use the Wild Birds Unlimited Nectar Port Brush to keep your feeder clean and presentable for hummingbirds.

Keep ants out of non-WBU nectar feeders with the Trap-It Ant Moat.

Simply fill a WBU Nectar Bottle with warm or hot water, add one cup of table sugar or one box of WBU Hummingbird Nectar, replace the lid and shake until the sugar is dissolved. Use your new nectar solution right away, or refrigerate it (in the bottle) until you’re ready to fill your hummingbird feeders. 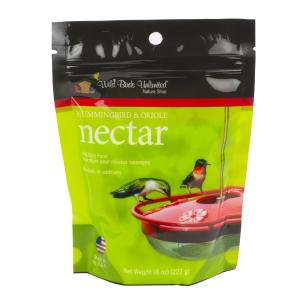 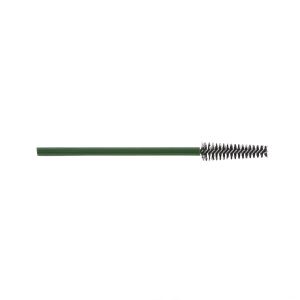 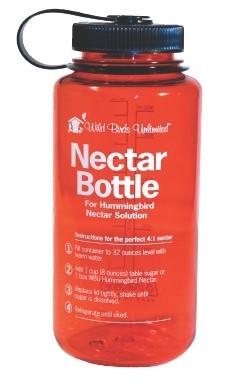 In nature, hummingbirds drink flower nectar for energy and eat bugs for protein.  Flower nectar is sucrose - regular table sugar - so it is very easy and inexpensive to make.  Mix 4 parts warm water to 1 part table sugar and mix it until the sugar has dissolved. There is no need in boiling it. Make a large batch and put it in your refrigerator so you have it ready to go!

- Do not use artificial sweeteners, brown sugar, honey, Jell-O or Kool-Aid.
- Do not use red food coloring. If your feeder isn't red, tie a red ribbon on it.

Be sure to clean your feeder regularly and change the nectar as needed - weekly in the spring, then as the weather heats up twice a week; three times a week if your feeder is in the direct sunlight.

Many birds show aggression when they feel their breeding territories or feeding areas are violated by unwelcome intruders. Aggressive behavior is typically strongest in late spring or early summer when the birds are claiming territory and defending nests, but the angriest hummingbirds may still be aggressive well into the fall as they defend prime feeding territories to prepare for migration. Male hummingbirds are often more aggressive at feeders while females show more aggression near their nests, but with both genders, this angry bird behavior can be amazing to witness.

Hummingbirds may be small, but they have a formidable array of weapons and threats at their disposal to discourage unwelcome visitors. When a hummingbird feels threatened, it may show aggression in a variety of ways, including:

Sounds: Loud, fast-paced chirping is one way to get an intruder's attention and let them know the area is already claimed.

Posture: A male hummingbird may flare his gorget to show off its colors more brightly, a sign of his strength and health that could dissuade intruders. Other threat postures include flaring the tail, spreading or raising the wings and pointing the bill at the intruder.

Dives: An angry hummingbird may first hover in front of the intruder – whether it is another hummingbird, another animal or even a human – and then fly high above them before diving nearly straight down right at the intruder. The base of the dive is usually marked with a sharp chirp sound made from the tail feather position, and that sound acts as another warning to unwelcome guests.

Chase: A dominant hummingbird may first confront the intruder, often at a feeding area, before charging at them and following them far away from the feeder or flowerbeds. These chases are often accompanied by angry chirps and other sounds.

Fighting: Fighting is often the last resort for showing aggression and discouraging intruders, but it happens regularly. Fighting hummingbirds use their needle-like bills and sharp talons as weapons, and can seriously injure, even kill, other hummingbirds that do not yield to their dominance.

While it can be fascinating to see hummingbirds argue, it can also be disheartening for backyard birders to create a generous hummingbird garden or feeding area only to have it taken over by a single bully bird. If one overly aggressive hummer is making trouble for your other hummingbird visitors, there are ways to minimize their territorial behavior.

Number of Feeders: Adding more hummingbird feeders can reduce aggression in the feeding area, as one dominant bird will not be able to defend multiple feeders as effectively. Similarly, adding hummingbird flowers to the landscaping provides even more food sources for more birds to enjoy.

Feeder Placement: Creating multiple hummingbird feeding areas with feeders in different locations can give more birds the opportunity to use them. Ideally, if there are aggressive hummingbirds nearby, different feeding stations should be out of sight of one another – placing one feeder around a corner from another can keep one aggressive bird from dominating both locations.

When Do Hummingbirds Leave?

They may be the world’s smallest birds, but beginning late summer, millions of Ruby-throated Hummingbirds will be making a big trip to Central America. This annual journey is part of an instinctive migration pattern that is regulated by hormonal secretions that are triggered by changes in the length of day. Feeders will not prevent hummingbirds from migrating! Learn more about hummingbird migration here.

You'll notice an increase in activity as they prepare themselves for migration. Hummers aggressively defend their food sources. Flowers are drying up and they need the nectar to load up for their trip. They possess the fastest metabolism of any animal on the planet, burning through between one to three times their body weight in food every day. The nectar from a feeder may be all the food they have, and survival may depend on their ability to defend it.

So, when should you bring your hummingbird feeder in for the winter?

We recommend that you wait until you have not seen a hummingbird at your feeder for two weeks. That way you will give other migrating hummingbirds a chance to refuel along the way.

Range Map of the Ruby-throated Hummingbird